(I would like to specify that I am in no way related to Mahua Channel or the producers/directors of this serial. In this post, I have only attempted to give a brief summary (not exactly a review) of the Bahubali serial aired on Mahua channel.  Readers are welcome to share their views on the serial. Criticisms are most welcome. However, please do not leave requests for acting in Bhojpuri serials or CDs of the serial, as there’s little I can help you with.)

For all of you who understand Bhojpuri, there’s a tele-serial I would like to recommend (I know my past recommendations have not fared as well; “kahani hamaray mahabharat ki” was one of them. But take my word this last time).

Bahubali, directed by Prakash Jha, renowned director of movies like Apahran and Gangajal, is aired at 9.30 P.M week nights on Mahua channel (it is the first Bhojpuri channel). 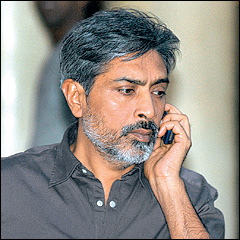 And true to his claims, the story is really different. Complement this with excellent acting skills displayed by characters (very rarely seen in Bhojpuri movies and soaps which are loud and rustic). The best thing about this serial is that it makes use of both Bhojpuri and Hindi, emphasising on the fact that local people of this region speak both languages. The characters speak the common man’s language, thus giving it a humble and back-there feeling.

Here is the story so far.

The serial is about two warring families of Maharajganj, some place in Uttar Pradesh.

Baba, who is the head of one warring family has Vijaykanth as the bahubali or don of the area in his camp. This makes the camp more powerful.

But the other camp is not a weakling too. Under the chairmanship of Dulari Devi, the wife of Late Babban lal (killed in gang fights), and with the help of her two brothers, Puttan and Binda, is waging a tough fight against Baba.

Baba and company announce Nisha Sharma as their candidate. She is the daughter-in-law of the family and aims to bring development and peace to Maharajganj, thanks to her upbringing in the open society of Mumbai.

Her opponent is K.D. Yadav, who is the son in law of Dulari Devi. However, he seldom gets the respect due to a son in law, maybe because he is making a living in his wife’s home (Ghar jamais have little respect in the indian society). However, one thing where he differs from the pack is that he is against any violence (at least he doesn’t professes violence of any sort).

So when he hears about the kidnap of Jaishwal’s son, he is furious at his mother in law.

But Dulari Devi has no hand in the kidnap of Jaishwal’s son. It is the handiwork of Baba and Vijaykanth.

Before I get on with Jaishwal’s story, let me first introduce you with Megha and Uday. Megha is the daghter of Baba and camp. Uday is the son of Dulari Devi. Now what ties them together is the love that germinated during their studies in Australia. Coming back to Maharajganj, they have found what big a blunder they have done of loving each other. with their families fighting with each other, would they ever allow their marriage. They want to run off this place, but are tied with familial duties and responsibilities. Until now they have succeeded in hiding their love from the glare of their families.

Coming back to Jaishwal now. Jaishwal is the head of businessmen in the Maharajganj market. He also has a sizable vote bank of banias and marwaris. When he declines support for Nisha Sharma (Baba’s candidate to the election) since he has already promised support to KD, Vijaykanth kidnaps his son to pressurise him.

Nisha Sharma wins the election with a landslide victory. On introspection is found that the businessmen of Maharajganj had betrayed KD and Dulari Devi. She immediately orders her brothers to launch a search for the kidnapped boy and gets him killed to turn popular feeling against Baba and camp.

As soon as the maimed boy is found lying near the Gandhi Chowk, the public is outraged against Baba and Vijaykanth. Jaishwal and his wife lay seige before the doors of Baba’s residence and the SP has to arrest Vijaykanth.

In the meantime, Dulari Devi and a few politicians, who fear Vijaykanth and his growing clout, plan with the SP to get him killed in the jail. It is the responsibility of Jaishwal to arrange the Rs 1 crores to be paid as prize money for the SP.

Jaishwal, like every common man, is sandwiched in the fights between the two families. First, he has lost his only son. Now he also has to arrange the sum of Rs 1 crore. Instead he decides to be part with Baba and coins a plan to nail the Dulari Devi camp, convinced that it was she who got her son killed.

He informs Dulari that Baba would be coming out of his fort like home and if she wants, can get him killed at this opportune time.

Unfortunately, Dulari Devi sends the black sheep of the family to kill Baba.

Rajjan Lal is the brother in law of Dulari Devi, and much hated for his bad ways. He has fallen in love with Seema Kumari, the daughter of the local pimp, who won’t part with her prize for less than Rs.50,000. So where does he arrange the Rs. 50,000. Of course from the safe of his sister-in law. And when the theft comes into the open, he easily saves himself in the lack of substantial proof. Anyway Dulari Devi would have wanted escape from this man. If he is able to kill Baba, very good. If not, at least he will be killed in the process.

Does Rajjan Lal fall in the trap of Baba? No! This time around Dulari and camp are destined to lose. But they lose KD instead.

When Rajjan Lal sees that he has been trapped, he instantly crosses over to Baba and camp and tells that he would do anything for them. Baba demands of him to kill KD, the political heir.

But KD is not dead. He has fallen in coma; much to the despair of Rajjan Lal who fears that his truth will come out if KD survives: He made up a story that Baba killed KD and was about to beat him to death.

I would be hooked on to the television for all these answers. If you people have liked the story until now, I would recommend you people too to switch on Mahua channel at 9.30 P.M weeknights.

90 thoughts on “Bahubali by Prakash Jha on Mahua”

Papa Dadi Kab Maregi
The Bihar of the Future
Delhi to Noida
Bihar in Sorry State
Tied in an Employment Bond
The Indian Muslim is confused, worried and angry
So Much For Honour
Mom and Maid
Just another day in the life of a husband and wife
My Top 10 Holi Songs - The Chitrahar Way
Operation Eunuch and the Murphy's Law at Work
Mumbai Under Siege
The 'Sh' Factor
Langdi Lalita

Ityaadi is when Aditya, the author of this blog, has nothing good to do and remembers he has a blog which he can pakao people with. If you by any chance like the stories here and would like to know more about Aditya, check it out at About me.
%d bloggers like this: